The Evolution of RH Brown Company
By Steve Guglielmo, The MHEDA Journal

The path that RH Brown Co. (Seattle, WA) has taken to becoming one of MHEDA’s most respected systems integrators has been long and winding. The company’s journey began more than 100 years ago, in 1911, when Richard Hazen Brown founded Washington Cycle and Supply. The company, operating out of Tacoma, Washington, sold bicycles and assorted industrial equipment. In 1936, Brown’s cousin, Stan Larsen, sold his pharmacy business and joined Washington Cycle and Supply. In 1948, the company changed its name to RH Brown Company. 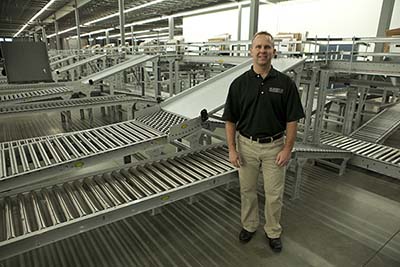 “The name change allowed the company to expand its presence in the material handling industry without the connotation that it only sold bicycles,” says Scott Larsen (pictured), the fourth-generation owner and current president and CEO of RH Brown Co. This proved a pivotal moment in the company’s history. “It was at this point that the company divided into two divisions,” says Larsen. “One focused entirely on the bicycle business, which had begun its transformation from distributor to wholesaler, while the other focused on material handling.”

Still, the material handling division of RH Brown looked very different than today. While the company focused on business-to-business sales, it sold mostly non-powered goods like hand trucks, casters, dollies and other industrial equipment. In 1965, Stan’s son, Richard Larsen, joined the company. His time as president marked a dramatic shift in philosophy. 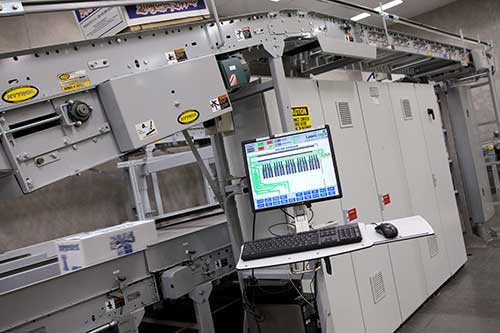 By 1986, RH Brown Co. found itself at a crossroads. “The two divisions had grown to the point where they really had no relationship to each other anymore,” says Larsen. “They were essentially two unique businesses operating under one roof.” Richard decided to take a big risk and divest the bicycle business to focus full time on material handling. At the time, the bicycle business accounted for nearly 70 percent of R.H. Brown’s profits. “It was a huge portion of the business,” says Larsen. “But it was also very volatile. There were a lot of ups and downs. My father (Richard) felt more secure operating in the material handling industry full time.” That risk has worked out beautifully for RH Brown; it has gone on to become one of the most successful integrators in the country. In 2011, RH Brown Co. was named one of MHEDA’s Most Valuable Partners, an award signifying a commitment to business excellence, professionalism and good stewardship — an award that RH Brown Co. has received for 11 consecutive years.

COMPANY EVOLUTION
Though the company had decided to focus all of its efforts on material handling, it would not be its last major evolutionary shift. “One thing that became evident was that much of the industrial equipment that we were selling began to become commoditized,” says Larsen. “It used to be that having a large inventory provided value. Now, you can buy a wheel almost anywhere. You can have a great business in a commoditized industry, but you are competing solely on price.” 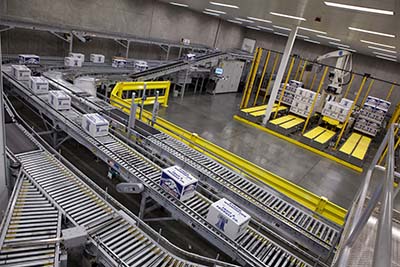 With this realization, RH Brown Co. began to branch into systems integration. “We decided that we didn’t want to be a company that just dabbled in automation,” says Larsen. “We made a conscious decision to become a systems integrator, rather than an equipment company that occasionally did systems.” However, unlike the bicycle business, RH Brown Co. did not want to simply abandon its well-known and widely respected equipment division that was more than 60 years in the making. Not only was it a very profitable venture, it also set RH Brown Co. apart from many other systems integrators in the industry. “If you look at many of the companies that have been started in the past 25 years, most of them were founded as systems integrators,” says Larsen. “They didn’t have an equipment background. We already had an established industrial equipment component, so there was quite a change. But, it also gave us a leg up in that we didn’t put all of our eggs in one basket.”

When Scott joined RH Brown Co. in 1995, the company had one sales force and one marketing plan to sell into two very distinct industry segments. In 2001, the company decided to split internally into two groups. The industrial group still goes out and sells equipment solutions like casters, hand trucks, pallet jacks, racks and gravity conveyors. The systems group sells turnkey solutions including conveyor systems, automated storage systems and palletizing systems, as well as services like project consultation, design engineering, project management, installation, software and control integration and after sale service.

ADDING VALUE
While engineered systems are not nearly as commoditized as industrial equipment, they are more commoditized now than ever before. “Fifteen or 20 years ago we could be considered a viable choice just because we carried Hytrol conveyors,” says Larsen. “Now, with the expansion of the Internet, information is available to everybody. The veil of territories and regions and exclusivities have largely been removed. Now, there are hundreds of outlets to get conveyors and automated storage equipment.” 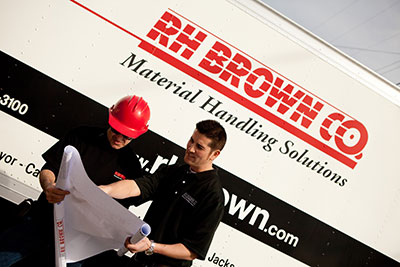 This left RH Brown Co. with a choice: compete solely on price or add value to the equation. “The good thing about commoditization in the systems market is that it really does make your value proposition the only thing that is being evaluated,” says Larsen. “In systems, unlike in equipment sales, we aren’t competing on the piece of equipment being sold. No longer is hardware the most important component in a system. Design is most important and then the control software. We distinguish our selves based on the whole solution and the value-added services that we package along with the equipment.”

In order for RH Brown Co. to compete on value, it first had to determine what that means. “We ask our customers what they value. It is an ongoing process,” says Larsen. “We have to determine what our customers’ key objectives are. What makes their businesses run? Once we figure that out, we can custom design a sys tem that is perfectly tailored to their needs. We are willing to invest the time with customers to determine what will be valuable for them.” Another way that RH Brown Co. adds value is by bringing services that were once contracted in-house. “Ten years ago, we would buy conveyor equipment from a supplier, then we would contact a mechanical installer, an electrician and a control company to bring the package together. We offered turnkey services, but it was almost 100 percent contracted,” says Larsen. To remedy this, RH Brown Co. brought the mechanical services in house in 2006. Then, in 2008, they developed proprietary warehouse control software – LeanLogix. This software is designed specifically to optimize productivity of the conveyor system and reduce energy consumption. “We’re not a huge company, so on some very large projects we still contract mechanical services. But now we’re able to put our key staff in place and better understand how to manage and operate the mechanical systems because we operate them our selves. Bringing these services in-house ensures that we’re constructing, managing and working safely on projects to our standards. Not only does this create value in how we execute the service, but it also allows for constant communication between the customer and RH Brown Co.” 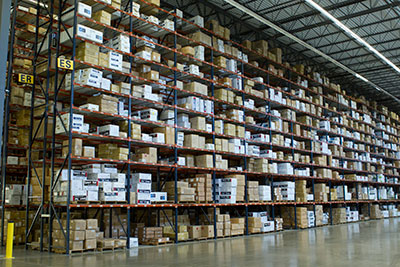 MOVING FORWARD
While being a value-added company that distinguishes itself based on customer service sounds great on paper, it doesn’t mean anything without the right employees to embody those virtues. With that in mind, R.H. Brown Co. has emphasized a team-oriented philosophy. “The word that I always use to describe our company is scrappy,” says Larsen. “We have a lot of passion for what we do. One of the characteristics that I have always found to be the most consistent and ultimately valuable for our community at R.H. Brown is working with people who have run their own businesses before. Almost 40 percent of our employees have had ownership experience of some kind. I think that instills a lot of autonomy and a can-do attitude when dealing with customers.” Larsen sees autonomy as an important characteristic in RH Brown Co. employees. “We have three criteria that we define success by, and one of them is creating a productive, opportunistic and respectful environment for all of our employees,” he says. “Our employees are empowered to make decisions. One of the neat things about being a part of our company is that you get to make decisions about how best to allocate your resources. You can scale up or down depending on the customer’s needs. We can shift gears very easily. I think that the bigger an entity gets, the harder it is to have that flexibility. To me, it’s one of the things that helps us stay successful.”
That environment makes it possible for RH Brown Co. to achieve its second criteria of success: meeting and exceeding customer expectations. “There is no one size fits all solution for exceeding expectations,” says Larsen. “There has been a dramatic shift in communication in the past 20 years with the advancement of the Internet, email and social media. But some people really prefer the old-fashioned face-to-face meeting. We can’t paint everybody with one brush. One of the reasons we have been around for 100 years is that we have maintained that flexibility to change with our customers – to evolve. When we do a good job communicating with them upfront, we know and learn what they want and what we need to do to be successful.” The third criteria for defining success at R.H. Brown is consistent equity growth for the company. “I have been to meetings where people have lofty five-year plans to double sales,” Larsen says. “Having a plan is great, but inevitably things will change in the next five years. I look at things with more of a football coach’s mentality. One game at a time.” Larsen attended MHEDA’s Strategic Planning program six years ago and it changed the way he plans and forecasts his business. “We had been holding one annual meeting where we set forth goals for the whole year,” he says. “We achieved maybe 10 percent of them. But this program taught me how to prioritize needs and issues and strategize our plan based around those. The idea that we’re going to do things on this huge scale became unimportant to me. Now I work more within an 18-month window and maintain an openness to evolve during that time-frame.” 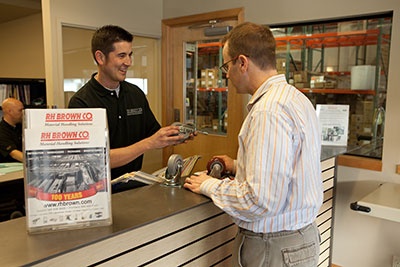 STRONG RELATIONSHIPS
While the company has been around for more than 100 years, one word that consistently describes R.H. Brown is evolution. From its products and services to the way they go to market, R.H. Brown isn’t afraid to change and adapt. One thing that hasn’t changed, however, is its emphasis on maintaining strong relationships, both with customers and suppliers. “Whenever we enter into a relationship, we always look for companies to partner with. Some companies are just looking for a quick trans action before moving onto the next one. We don’t do business with those companies,” says Larsen. “Any relationship is about give and take. It has to be a good fit for both companies. I feel very fortunate because we have been able to align ourselves with what I think are the premier suppliers in the business,” he adds. “We have long-term relationships with Colson, Hytrol and Southworth. If I were starting an integration business today and didn’t have any suppliers, those are the first three that I would be looking to make an arrangement with.”

With an emphasis on value, a willingness to adapt and a strong product and service offering, R.H. Brown has not only lasted 100 years, but grown and thrived. With organizational philosophies and cultures like the ones that the distributor has in place today, it’s a good bet they will continue to thrive for the next 100 and beyond.

Originally published in the The MHEDA Journal, July 2012
Updated and republished with permission: November 2021